The Lord Mayor of Belfast, Sammy Wilson came to assembly at Elmgrove. Some of the P.7 children wrote to him thanking him for coming. 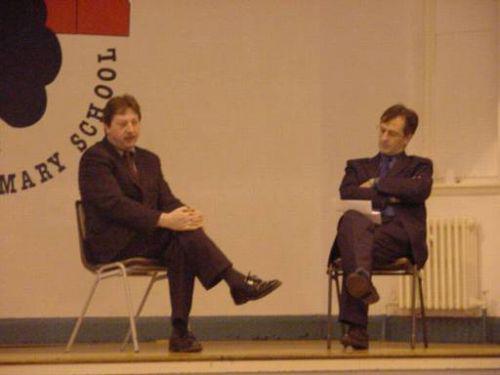 To the lord mayor of Belfast
(councillor Samuel Wilson)
I am writing to thank you for visiting our school the other day, or should I say your old school. Our teacher told us that you came to our school to talk to Mr. Hutchinson and; he asked you if you woubdn't mind talking to the pupils and you took time out of your busy schedule to talk to all of us in assemembly and l woubd like to thank you for doing that.
From your talk I gathered that you had very fond memories of your time here at Elmgrove, as I am approaching my last few months here I to have enjoyed: my schooling at Elmgrove immensely and maybe someday I will come back to Elmgrove like yourself and share with the pupils, my fond memories of this GREATl school and the super time I had.
In ending, once again I would like to thank you for visiting and talking to us and wish your term as Lord Mayor of Belfast success for the year.

Mr.Hutchinsons interview with Sammy Wilson,Lord Mayor of Belfast.
Mr.Hutchinson asked "What schools did you attend?"
Mr.Wilson answered "I started my years in Elmgrove Primary School because I lived in East Bread Street.}I enjoyed my years in Elmgrove .In P7 I had Dr.Hunter.Then I went to Methody which I enjoyed too.I was the first in my whole family to attend University.It was great.I supported Liinfield in my early years."
Mr.Hutchinson asked "What jobs have you done?"
Mr.Wilson replied "I taught in Grosvenor Grammar School. Then I was elected to be Councillor.A counciHor is someone who takes care of noisy neighbours,rubbish,parks and Leisure centres so Belfast is a nice place.Then I became Lord Mayor."
Pupil asked "is your chain heavy round your neck?"
Mr.Wilson said "Only when I go to a dinner or something and don't come home to about one in the morning.It can get very heavy because it is 7kg of gold and is worth 1/4 of a million pounds.
Mr.Hutchinson asked "You wear other things too could you tell us what?"
Mr.Wilson answered "It's terrible I have to wear a black robe with frilly cuffs and a Dick Turpin hat. I have a chauffeur and a blue Jaguar with two flags on it its registration is WZ1."

Mr Hutchinson was interviewing Sammy Wilson in assembly and discovered that he used to be a pupil at Elmgrove.When he was in P7 his teacher was Dr Hunter,a former principal at Elmgrove.He used to live in East Bread Street but it is now known as something else.
When he was young he was a Linfield supporter and used to tease Dr Hunter about it because he supported the Glens.
After primary school,Sammy Wilson went to Methody and later went on to Queens University.
Then as years went on he became the Lord Mayor of Belfast.He drives about in a blue Jaguar with flags at the front and he even has a chauffeur.
Sammy Wilsons job is to deal with problems such as noisy neighbours and rubbish.He usually wears a gold chain which weighs about 7kg and is worth about a quarter of a million pounds.He also has a black robe with frilly cuffs and a Dick Turpin hat which he doesn't wear very often.

Dear Mr Wilson,
My name is J.S. I am a pupil at Elmgrove Primary School and I am writing to thank you for taking the time and trouble to come to our assembley on Tuesday 6th March 2001.

Being a former pupil of Elmgrove I'm sure you must have seen some changes since you were a pupil here and it brought back a lot of memories for you.

I know you must be a very busy man being the Lord Mayor of Belfast and also a Councillor, with lots of meetings and television interviews to attend and doing lots of speeches all over Northern Ireland.

Once again I would like to take this opportunity on behalf of everyone at Elmgrove to thank you for your visit and we are all looking forward to your next visit.

I want to thank you for coming to talk at our assembly. It was veory kind of you to come at such short notice. Your talk wasvery interestIng ; and I was very surprised to know that you went to Elmgrove School. I loarnt much more about you that I didn;t know. I hope you enjoyed coming and talking to us as much as we enjoyed listening to you.
I want to thank you again for coming, I really appreciated you coming and would like to see you in the future. 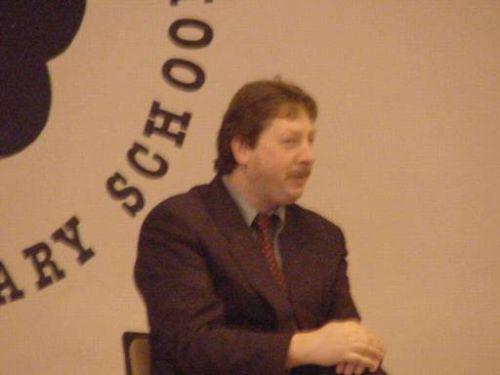