No date or clues about these except they all are from the same roll of film.
The nagatives were found and if the opening of the Con O'Neill Bridge photos can be dated these will ikely be from the period as they from the same roll of film.
The third picture appears to be taken at a different time to the others but is from the roll of film as is "Trip". If you know anything or can supply a year or can name anybody in these photos contact us.
Lousie McClure stated that Sandra Massey, Jennifer Johnston, Jacqueline Graham, Wendy McCreight ( who has now passed away), Arlene Bowers, Joanne Allen, Angela Barry are in the photo.

Phil Griffiths writes on photo above:
The dark haired boy to the left is Scott Woodburn (I think)
The boy with the fingers in his mouth is Gary Grey (who passed away last year)
The boy with the rangers football shirt on at the front is William Woods 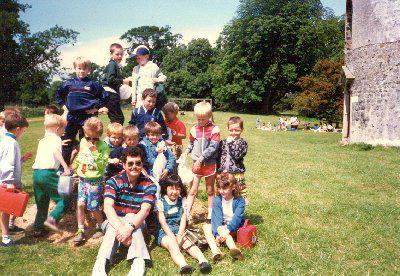